The term refers to the ability of the door to maintain a permissible deformation, preserve its properties and safeguard the users’ safety while being subjected to strong pressures and depressions such as those caused by the wind.

The test method (UNI EN 12211) consists in exposing the door to sudden and intense pressure differences and then checking that its functional and performance characteristics are intact. According to the UNI EN 12210 norm, the door can be classified in five classes for wind pressure (1,2,3,4,5) and three classes for its relative front arrow shown in the picture above (A,B,C), whose combination provides the door’s classification (C3, B5, A1, etc.).

The term refers to the ability of the door to prevent water infiltration under the action of differential pressure between the inside and the outside, a process similar to that of the wind resistance test. According to the standards, the test method (UNI EN 1027) consists in sprinkling the entire door’s surface with a certain amount of water. The leakage detected through all the opening and glazed parts of the door at a certain pressure level allows the door to be assigned a class, which corresponds to that same pressure level. As established by the UNI EN 12208 norm, there are nine classes that can be reached by the door and then combined with the letter A, corresponding to the method (1A,.........9A).

The term refers to the ability of a closed door to let the air filter in case of pressure difference between the inside and the outside. According to the test method (UNI EN 1026), the door is fixed to the test wall with a special equipment that allows to cause pressure difference between the external and the internal façade of the door and to measure the volume of dispersed air.

Air permeability is then calculated based on the volume of dispersed air, the entire surface of the door and the length of the opening joints. As established by the UNI EN 12207 norm, the classification provides for four classes of performance (1,2,3,4). 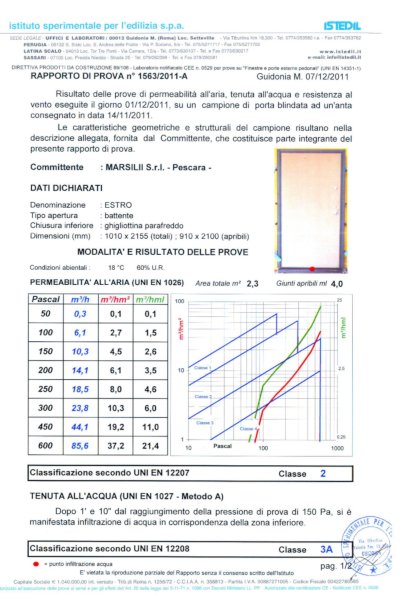 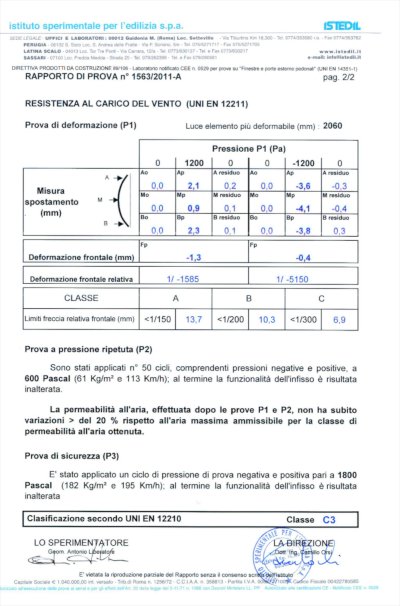